I’ve gotten onto two kicks recently. The first is making tools from scratch or from kits (since I’m lazy), the second being developing my hand tool skills. So it was appropriate that signing up for Shannon Rogers’ (The Renaissance Woodworker) Virtual Hand Tool School led to our first assignment delivering on both of these.

This first assignment is intended to build skills in planing down some rough stock to a flat, co-planar board as well as some basic chisel technique. I won’t delve too much into the details of ‘how’ you do these things (join us at school if you want to learn it first hand…it is worth it) but I will talk about my personal take on the experience.
END_OF_DOCUMENT_TOKEN_TO_BE_REPLACED

This weekend, I received a gift I cannot put a price on.  I was given a carver’s woodcarving kit.  This is not something you purchase at Lee Valley, Woodcraft or Lie-Nielsen.  This is a carving set built up over time by a person of simple means with a passion for woodcarving.

A bit of history.  I have a neighbour, in his 80’s who along with his ‘girlfriend’ (also in her 80’s, a very cute story for another time perhaps) who have adopted my family as their own (figuratively).  For many years he did a lot of woodworking, building rocking horses and framed mirrors which he sold at fairs.  His girlfriend did a lot of woodburning and woodcarving.  Along with her husband, they were key members of the Ontario Woodcarvers.  We visit back and forth and talk often about woodworking.
END_OF_DOCUMENT_TOKEN_TO_BE_REPLACED

I shot part II of the assembly video after the fact, once the glue had dried up, there really wasn’t much to do.

A quick pass with the band saw and I had the final shape of the plane ready for a quick bit of sanding.  The sanding process involved cleaning up the bandsaw marks, flattening the sides as they were slightly uneven.  The sole needed a quick pass with sandpaper, while holding the plane up against a square block of wood.
END_OF_DOCUMENT_TOKEN_TO_BE_REPLACED 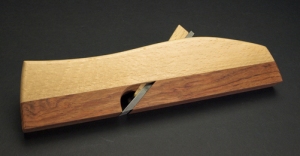 While at Woodworking In America, I had the pleasure of talking with Ron Hock  for a bit. While I was most impressed with his $1 wooden planes (balsawood with wings) I was equally impressed by the kits he had for a shoulder plane and a Krenov style plane. I ended up buying both…ok, you got me, I bought the balsawood plane too.

I explained to Ron that I was new to tools without tails and he handed me a small wooden plane and encouraged me to try it. It felt awesome to hold and having played a bit with metal body planes I was surprised at how much more you can finesse a wooden plane. That was when he told me that the plane I was using (my first wooden plane experience) was a Krenov plane….made by Krenov himself. Not bad for a first experience.
END_OF_DOCUMENT_TOKEN_TO_BE_REPLACED