The lady asked, “Where’s the beef?”  I’ve got your beefy goodness right here under my workbench.  The base is built from 6″x6″ pine and it’s every bit as beefy as it looks in the pictures.  I knew I wanted to make the base as hefty as possible (going with the Workbench commandments).  The best I could find that was both reasonably priced and reasonably dry was some pine timbers from the lumber mill that had been there for “a few years” according to the lumberyard assistant. 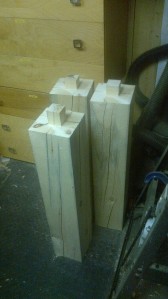 Before I get too far into the explanation of the base construction, I have to admit that some of this construction is intermingled with the construction of the leg vise, more on that in the next post where I’ll go into some detail on the leg vise and some experiments that produced less than impressive results.  If you’re building a bench with a leg vise, don’t put the base together until you’ve finished up your leg vise, you’ll thank yourself.

Getting everything roughed out was a pretty straightforward job.  I ran everything through the jointer/planer to get a nice clean surface, cut the pieces to length and use a dado stack on the table saw to cut the tenons.  I ended up rigging up a jig on my table saw to deal with the big heavy timbers, but I think this proved to me that someday soon I need to build a sled for the tablesaw, moving these beast smoothly was a little annoying and probably a lot less safe than using a sled. 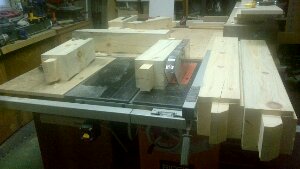 The tenons on the legs are for mounting the slabs onto the base, they are about 2″ cubes, although I cut them down in length a little when I mounted the slabs, 2″ mortises in maple slabs isn’t as much fun as it sounds.  The upper stretchers were equally simple, 2″x2″x4″ tenons cut on both ends.  The four lower stretchers have one small difference, the tenons need to be mitered as they will meet each as their mortises intersect each other. 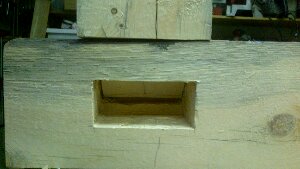 Cutting the mortises, while a little time consuming, was much easier than I thought.  Hooray for pine!  If this is any indication of what timberframing is like, I think there will be more of it in my future, these massive joints were really easy to work with and relatively forgiving.  I took the approach of predrilling out the majority of the waste in the mortises with a big forstner bit, then cleaned up the rest with chisels. 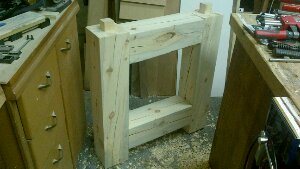 I pondered taking the time to fill all the cracks and shakes in these timbers in order to stabilize them, but decided, this is part of what will give my workbench character and charm.  So far, I have to say I think I made the right choice, it looks rustic and earthy. 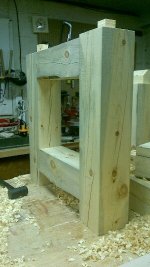 For assembly, I had just read Chris Schwarz’s blog where he was ‘forced’ to use 5/8″ pegs in the drawbored assembly of a workbench, with great success.  Given that I’m buying into the majority of what Chris has written about workbenches, I figured I’d give it a shot as well.  I assembled the two pairs of legs with the short stretchers, making a left and right pair.  I was a little anxious about the drawboring, having never attempted this before, but it went surprisingly well.  Once assembled, these legs were rock solid. 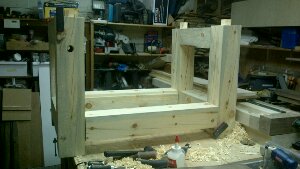 I waited to put the long stretchers in place until I had the slabs ready to be installed, hoping that this would minimize any errant movement.  Sadly, I was already a little too late on this.  The leg assemblies had dried out a little after they were put together and I ended up with a very slight twist, resulting in the legs being parallel, but a few degrees off 90.  The only real consequence of this is that the front faces are slight off relative to the bench top, but so far I don’t think it has really mattered.

This entry was posted on September 25, 2012 by woodcanuck. It was filed under Workbench, Workshop and was tagged with workbench.